My biggest leap of faith in business 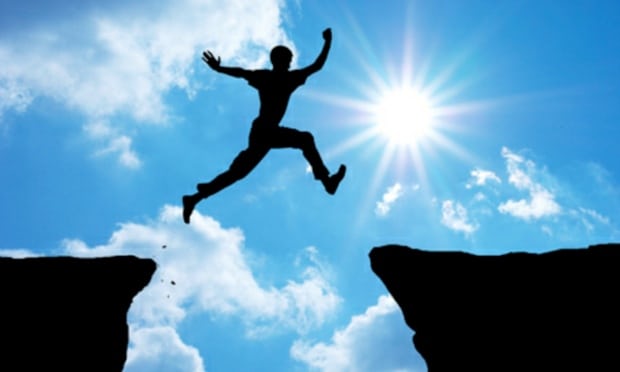 Wendy Tan White’s first major leap of faith wasn’t, as you might expect, starting Moonfruit with Joe White and Eirik Pettersen during the first dotcom boom. It was carrying on when the dotcom bubble burst in 2001, she reveals.

“Funding ran out, so we had to cut the team from 60, to 10, then two, which was very tough,” she says. “But we totally believed in our mission to enable small firms to build their own websites.” By 2012, when the business was sold to the Yell Group for £23m, seven million websites had been built using the pioneering Moonfruit platform.

Tan White admits that leaps of faith still “bring the same vertigo and butterflies”, even after years in business. Her latest, 18 months ago, saw Tan White and husband Joe join Entrepreneur First (EF), the London tech accelerator started by Matt Clifford and Alice Bentinck in 2011. “We joined because we want to help the best talent to build world-class startups from scratch. We were also looking for something that was worth betting our time and money on,” she says. “Matt and Alice are exceptional people.”

In May, Entrepreneur First had its first major exit, when Twitter acquired AI start-up Magic Pony for $150m. “We’ve raised £40m to extend EF’s company-building programme from six months to two years, and invest further in companies. We’ve personally invested in 12 businesses in our portfolio of 20 – and mentor many more. Becoming investors has been a totally different leap of faith.”

Tech entrepreneur Chris Barling was 40 when he took a life-changing chance to set up his own business. “I left a well-paid job with Cable & Wireless to set up [ecommerce software provider] Actinic in 1996,” he says. “My co-founder and I funded the launch and my family of five had to live on £8,000 in that first year.”

Software development involves considerable investment before any revenue comes in, he adds, often leaving owners short of cash. “It was a major leap of faith. I was continually being told people wouldn’t buy online, but the business grew to be worth £250m.”

Barling estimates £10bn of sales went through Actinic-powered websites before he moved on in 2014. He now sits on the board of a FTSE 100 company and two high-growth tech startups. And he has started Powered Now, a provider of invoice, estimating and scheduling mobile software for small trade businesses, such as plumbers, electricians and builders.

“Again, I’m told trades people will never be keen on technology to run their business. [But] they will, because now it’s mobile, like them, and simpler. It’s taken personal investment, but now we have more than 1,100 paying customers and 60,000 trade businesses have downloaded our app. Entrepreneurs must sometimes take leaps of faith. It’s hard, but can bring the biggest rewards. It should never be an [unconsidered one] though.”

“In 2012, after Airbnb started to take off, it just came to me and stayed in my head,” says 24-year-old Ross Bailey of starting his business Appear Here. “Maybe something similar could help fill the huge number of empty UK retail premises.”

To test this theory, Bailey and a friend took a short-term let on premises near Carnaby Street and sold T-shirts to coincide with the Queen’s Diamond Jubilee.

Others showed interest and the viability of the pop-up shop concept became clear. The company launched in February 2013 and is now a leading online marketplace that connects landlords with brands and businesses seeking short-term retail space in the UK.

“My leap of faith was simply telling others about my idea,” Bailey reveals. “Some said it was rubbish, but one person said I shouldn’t over-think it. Try it out and if it fails, it fails.

“There’s something powerful about telling people about your idea. Many people want you to succeed. Ultimately, you win or you lose, but the initial momentum begins.” Appear Here now has offices in London and Paris and more than 40 employees, having raised some £5m in funding.

Saurav Chopra took a chance in 2014 when he cofounded Perkbox, a platform employers pay to use to provide employees with “access to more than 200 perks, an online reward and recognition system and a wellness hub”.

Chopra explains: “Parent company Huddlebuy was a highly profitable lead-generation business, turning over £1m-plus, but we wanted to build something we could scale worldwide. [Starting a new business] that wasn’t generating any revenue required a huge leap of faith.”

Justifying the idea to his board, investors and employees was incredibly hard, admits Chopra, and Perkbox was one year in the making before launching in 2015. “Just two years after deciding to pivot, revenue has grown by 13 times, and we’ve gone from 15 employees to 100, without any external funding.”

Chopra believes that entrepreneurs must regularly take leaps of faith – these are mostly small, but occasionally very significant. “They key is to minimise risk,” he says. “Evaluate as much data as possible; get input from key team members; and feedback from potential customers. Once the decision’s been made, you must communicate your rationale and plan to the rest of the team.”

Steve McGauley’s leap of faith involved relocating his marketing agency from London to Liverpool. “I started Liquid in 2000. Three years later, after growing steadily, moving to the north west seemed the next natural step.

“I’m Yorkshire born, but my dad’s a Scouser and my family live in the north – it’s where I feel most comfortable. I considered Manchester and Leeds, but I’m a passionate Liverpool FC fan and the thought of a short drive to Anfield was too much to resist,” he laughs.

While it was a big move, McGauley says agencies don’t need a London postcode to compete. “We have a high success rate of winning work against agencies regionally and in London,” he adds. “We have the same work ethic and creativity, but charge less usually.” Liquid now has 17 employees and an impressive client list that includes Levis, Warburtons and Liverpool John Lennon Airport.

The main reason for relocating was better quality of life, he says, particularly at a time when he and his wife wanted to start a family. “London consumes you; working very long hours is expected. Personally, I never had any doubts. I believed in my business and in Liverpool.

“I’m thankful for my time in London,” he adds, “but moving to Liverpool has been one of my best decisions ever. The talent and drive here reminds me of London, but the people in Liverpool tend to do it with a smile on their face.”

While leaps of faith can be terrifying, when they’re taken with careful consideration of the risks and benefits on the line, they can be the push that a business needs to grow and thrive. What will your next leap of faith be?

Content on this page is paid for and produced to a brief agreed with Hiscox, sponsor of the Adventures in Business hub on the Guardian Small Business Network.